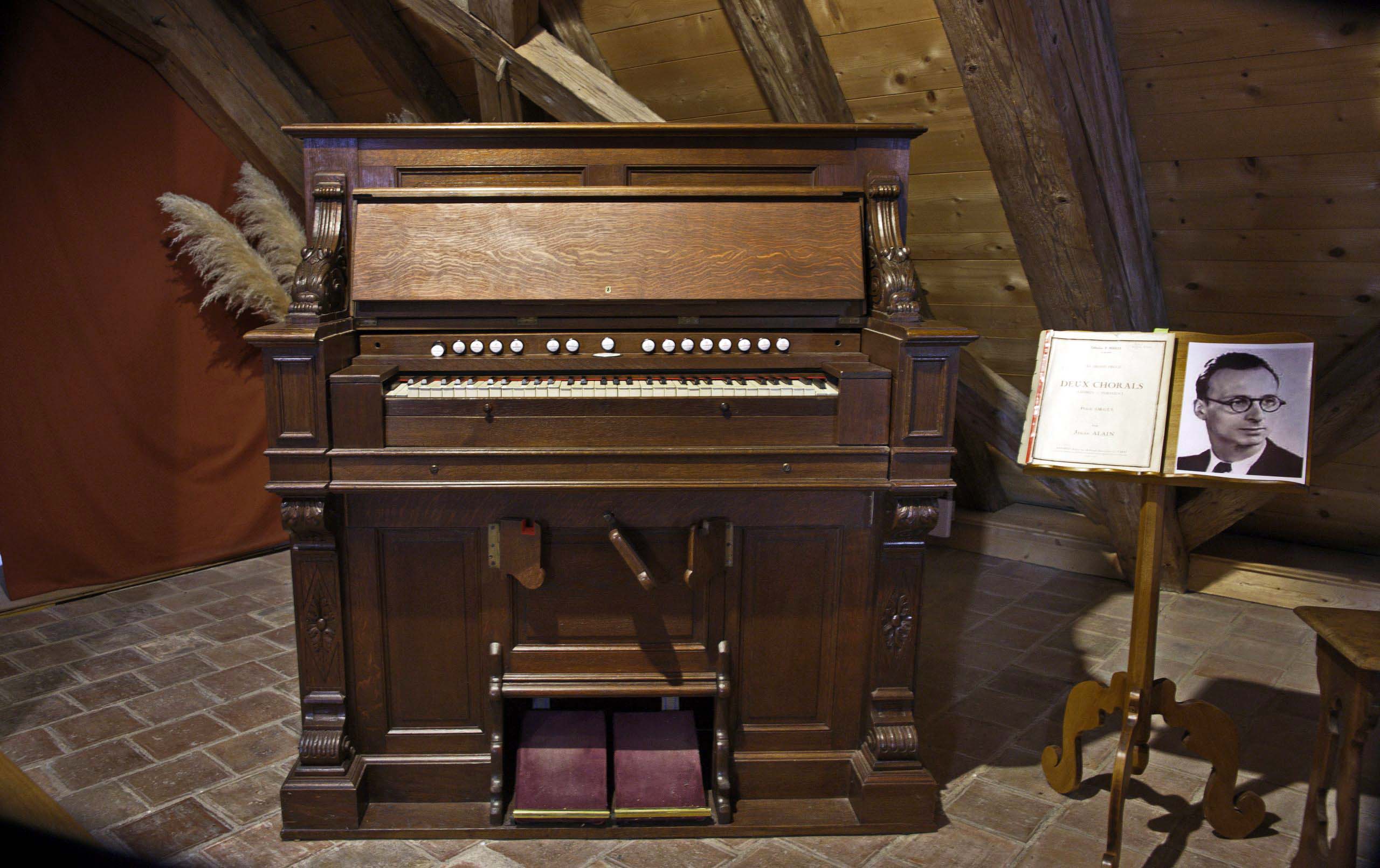 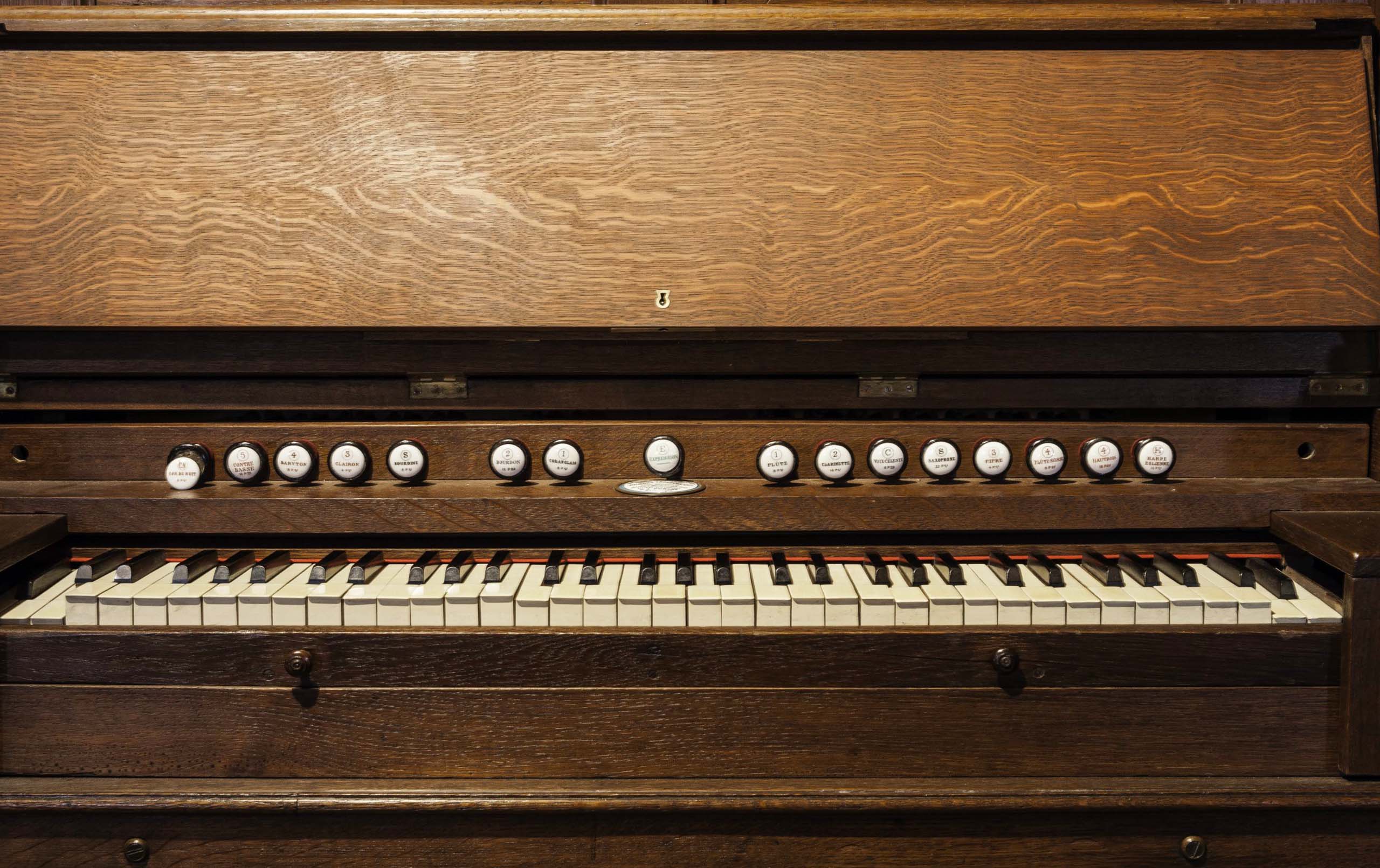 In June 2000, Marie-Claire Alain wrote to the Association to inform that, if we were ready to accept it, a new « poisoned present » (MCA's own expression !) could hit the road to Romainmôtier.
The object was originally a harmonium with 2 manuals and 6 ½ registers, called « orgue médiophone No 4, modèle G », built by the Dumont-Lelièvre company, and bought in 1898 by Albert Alain from the « Manufacture d'orgues des Andelys », in order to have a practice instrument. At the same time, Albert Alain ordered an extra transposable manual of 5 octaves in ivory.

The « médiophone » is a harmonium, whose sound is enhanced through wooden resonators built into the upper part of the case. These resonators are still in the instrument, now located in Romainmôtier.
Albert Alain enlarged himself immediately the instrument upon delivery, adding a pedalboard and the extra manual, serving as a coupler manual reuniting the two original manuals.
The harmonium can be seen in this modified form on the famous photograph showing young Albert Alain playing the Toccata in b minor by Eugène Gigout. The quality of the picture allows a clear reading of the score opened on the noterack.

However, when it reached Switzerland, the instrument had only one manual. In the family, all kinds of contradictory stories were going around, additional confusion being generated by vague memories of the existence of another harmonium, bought in 1897, and transformed sometimes into a case for firewood.
Exact observations by Marisa Bovet on the picture and the instrument made it doubtlessly clear, that the « poisoned present » was indeed the same as the harmonium on the picture.
What had happened ?
When he started constructing his house organ, Albert Alain, whose energy in building all kinds of things could never be stopped, took the three manuals and the pedalboard of the modified harmonium for his organ console (manuals II, III and IV), and had a new keyboard built for the first manual of the organ. Then, in order to keep the cannibalized harmonium playable, he adapted another keyboard of unknown origin and connected all the stops to it.
In this condition, which lasts until our days, the harmonium was kept in Saint-Germain, in the chapel of the « Prieuré » of painter Maurice Denis (d. 1943), a close friend of Albert. One of Denis' daughters, Bernadette, was a student of Albert Alain und played the instrument during the services celebrated in the chapel.
After the death of Maurice Denis, the house was turned into a museum and the harmonium was stored in the reserve, from where it left for Romainmôtier in 2000. 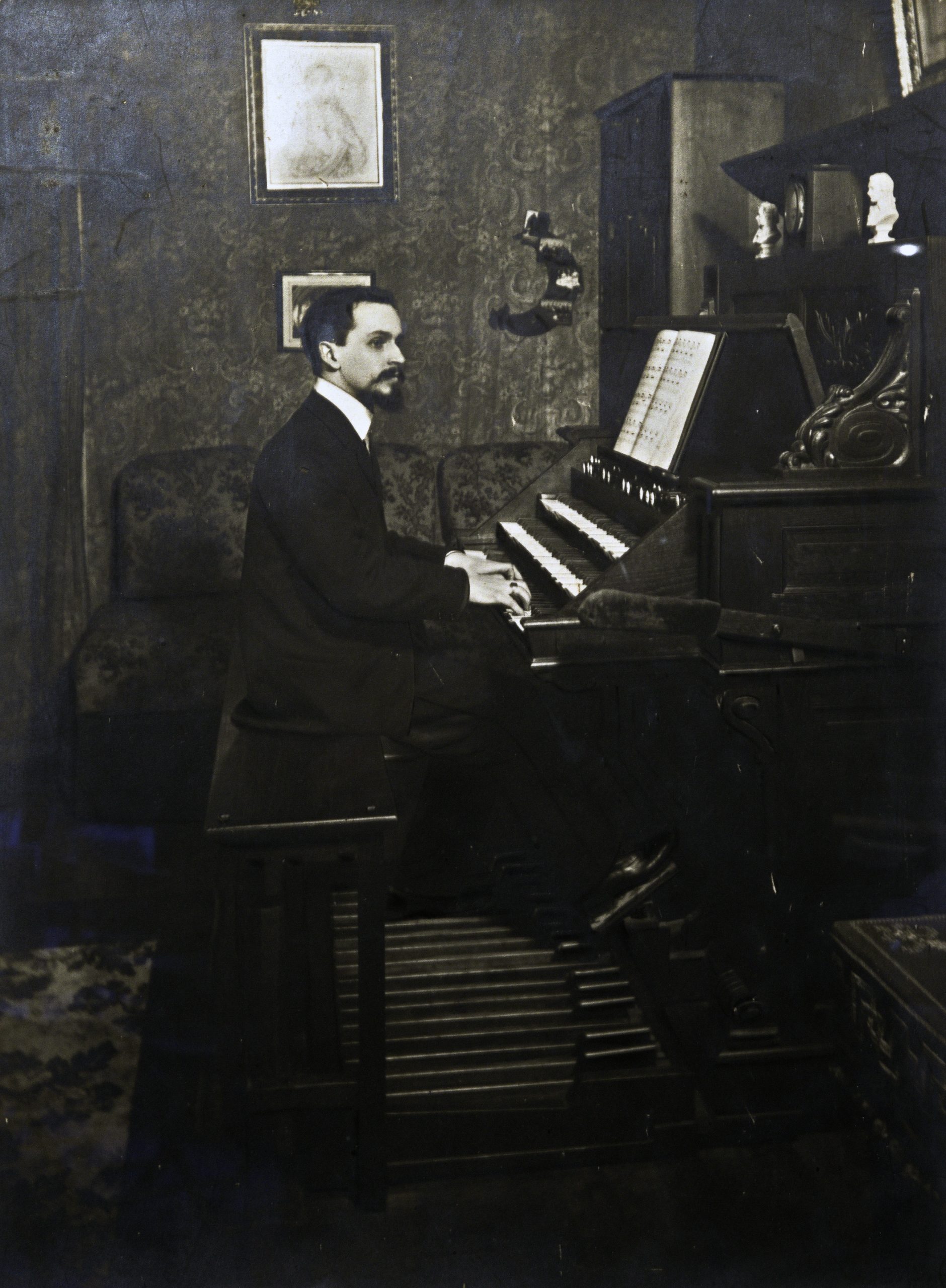 The instrument at present

Which instrument exactly is now in the case of the « médiophone » by Dumont-Lelièvre ?
Two expertises by Joris Verdin in July 2002, and by Marc Fitze in winter 2003/2004, give good elements of answers. The few remaining doubts will probably never be completely solved.

The keyboard now installed (transposable, of a Paris manufacturer, but not by Dumont-Lelièvre), reunites following, probably original stops (from left to right) :

This keyboard pushes through stickers on rocker arms located below, which have been lengthened in an improvised way. The performance of this operation has obviously been problematic, difficult and generally not very successful. The keyboard action is clumsy because the arms have been made too long.
The chest had to be modified at both ends, in order to fit with the (not original) wind supply system. It could be that it is one of the two original chests, but replaced differently. Some holes have been drilled without proper tools, then closed again, probably after unsuccessful attempts to increase the range of the keyboard.

Two careful repairs (Jean-Louis Loriaut, Marc Fitze) have nevertheless made the instrument playable again.
The reasons for the fragility of the harmonium could easily be traced. The case has lost its solidity : any small change of position can provoke cyphers and other defects. Certain vital parts have been attached to the case with metal angles installed by Albert Alain : the slightest torsion can generate untightness and other problems in the chest.
Used with care, the instrument can however still produce impressive sounds.

In any case, this harmonium enriches the Alain collection in Romainmôtier in an important way, as well from the musical and historical as also sentimental points of view. The presence of Albert Alains harmonium next to the organ to which it gave so many vital parts, makes a lot of sense.